In this article I will quickly be going over some of the possible catalysts/events that we as investors can expect to see within the next few weeks/months. I will not go into detail on what the financial/valuation impact these events could have on the stock price/company.

As Smith earlier tweeted out:

“The Summer of 2020 is shaping up to be an exciting one at Smith Micro. Stay tuned for some exciting announcements in the coming weeks!”

SafePath 7.0 is widely expected by all investors within the next quarter or so. Bill Smith previously guided towards “mid-summer” in the last earnings call. Recent talks with management and an institutional report detail that the company is still on schedule. As we head into July, it can be reasonably assumed that SafePath 7.0 is right around the corner.

Safepath Drive is something that was brought up recently by a twitter tweet by Smith. Reaching out to the company, they have noted that the functionality for SafePath Drive is ready to go and will be available for sale going forward. Although for now we as investors will remain in the dark on all the details. Note the slight possible hints that Smith has provided from the home page banner below. 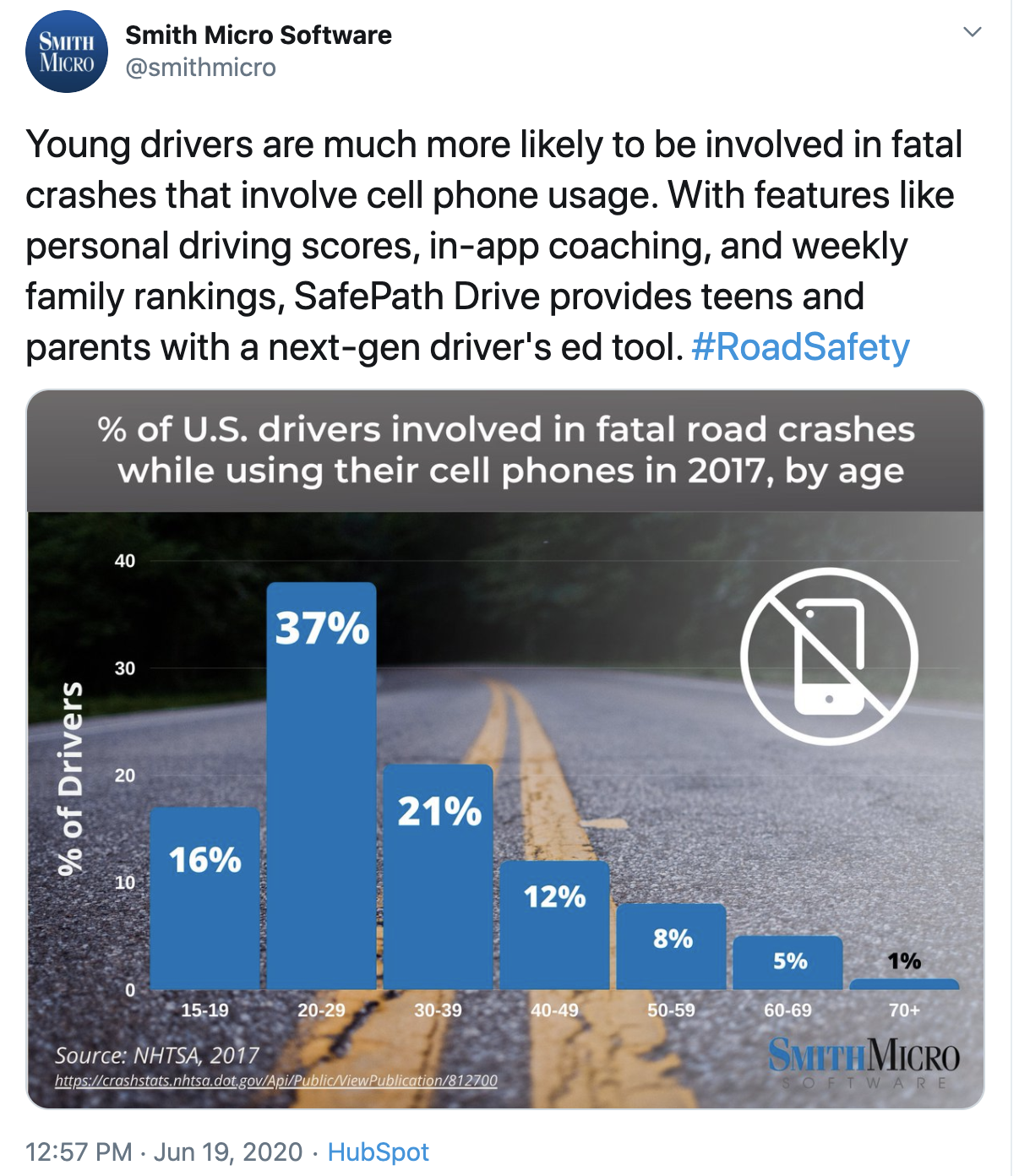 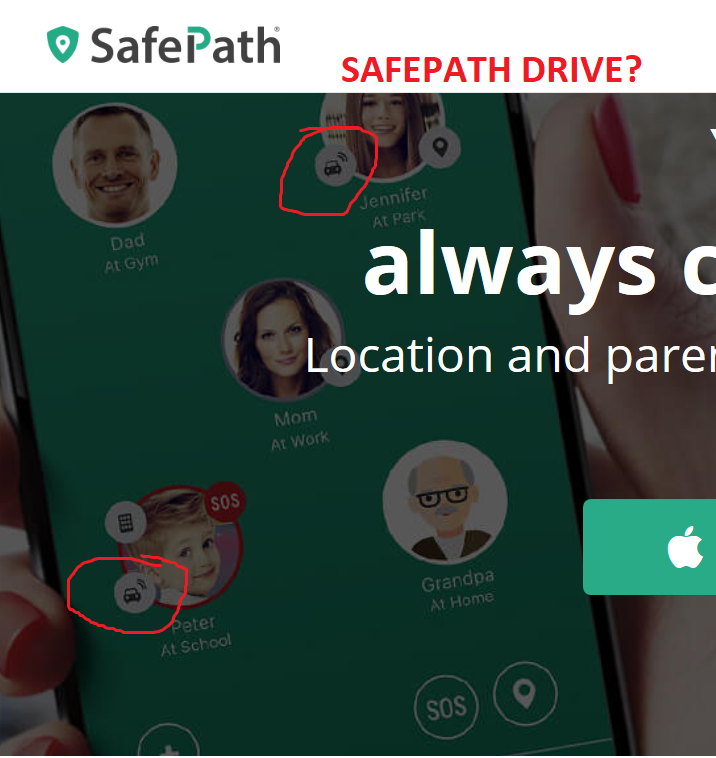 Bill Smith has noted that SafePath is likely to announce some wins in the near future. Some of the currently ongoing talks include customers in Europe and Middle East. Unfortunately, the details on these talks are still not widely known, nor are their timeframes.

However, two customers (T-Mobile and Telus) are much more apparent and there are clues everywhere that point to these wins in the near future with T-Mobile being specifically guided on by the company.

Telus is a company which has been widely speculated to be in talks with Smith Micro for the SafePath platform. The proof is unmistakable — even the support ticket system is already ready to go (https://telustrackplussupport.smithmicro.com)

Note that this is for SafePath + Tracker. The tracker which is sold by CoolPad. Interestingly enough, Coolpad recently also partnered with Telus!  Details about the tracker can be found through the following link below which is provided by Coolpad’s major subsidiary, Yulong Computer Telecommunication Scientific. 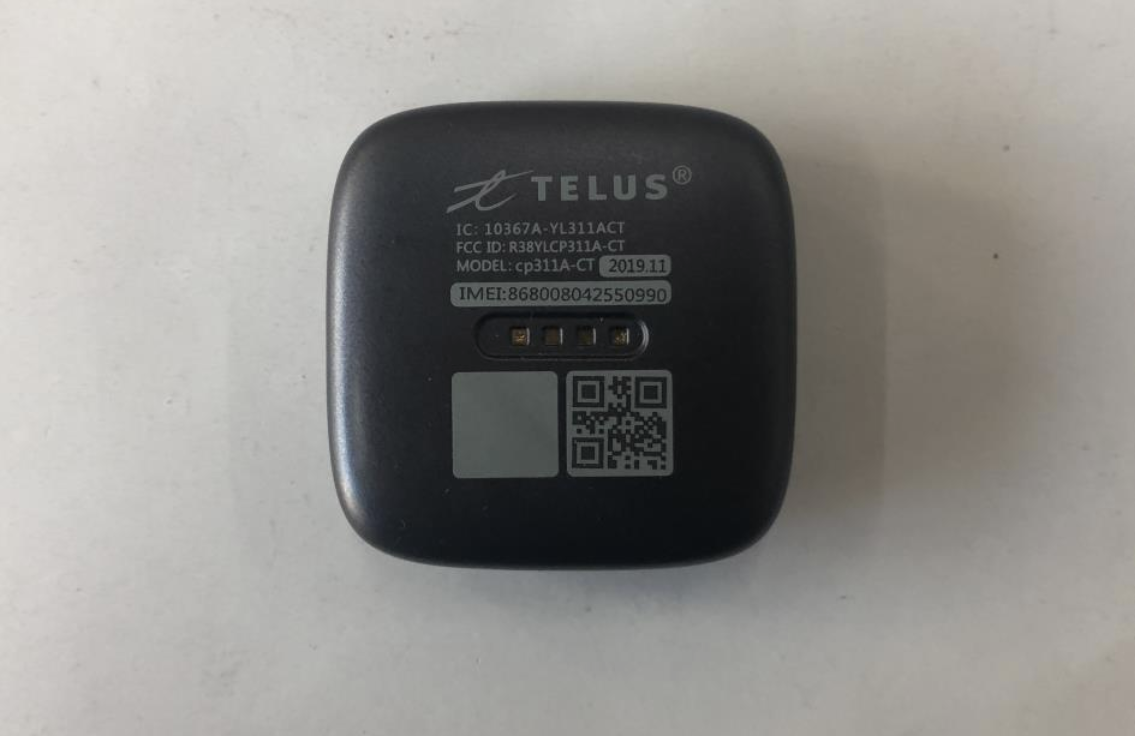 The proof above is all we need as investors to know that the relationship between Smith Micro and Telus is already deeply rooted. An announcement disclosing the relationship may be right around the corner.

Unlike Telus, New T-Mobile has been widely discussed by management. Management has guided towards a new contract with T-Mobile once SafePath 7.0 is released. Given the “mid-summer” release of SafePath 7.0, it’s safe to assume once the product is released, a new T-Mobile contract could be on the horizon.

In addition to SafePath, Bill Smith has also noted that Viewspot is likely to announce some wins in the near future. Unlike the probable SafePath customers, the likely ViewSpot customers are still very much speculative at this point. The evidence to support these wins comes mostly from the demos found in the play store and the DNS domain server names. Most recently, Smith has openly published two demo apps in the playstore for Viewspot. Namely for two companies, Cricket and TCL.

Cricket is a subsidiary of AT&T and given that Smith just recently won over AT&T Mexico, a Cricket win is something that is not out of the question.

TCL on the other hand is a brand new customer with no previous connections. However, when management was asked a question regarding Viewspot’s functionality with non-telecom companies, management noted it could be adopted to a wide variety of store layouts and companies including TV based setups.

Orange was another telecom company that was speculated as a ViewSpot win given that they were accidentally included in the September 2019 investor presentation as Smith customers as seen below. However, after investors vetted management on this detail, these slides were quickly changed.

All of these companies have DNS servers associated with them at Smith Micro although unlike their SafePath counterparts, no other concrete evidence has been found, and thus remains vastly speculative. 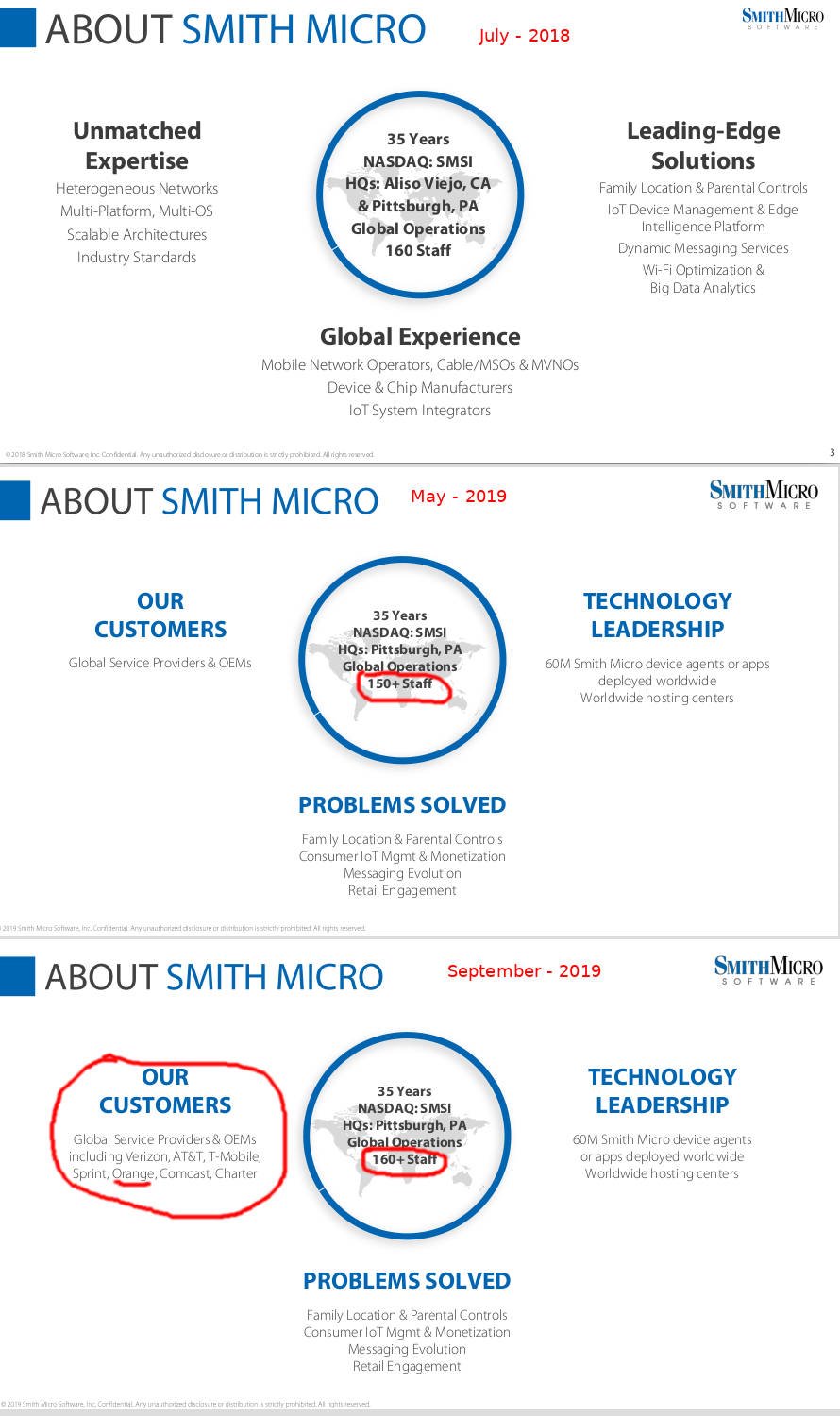 I won’t go into the details of the merger again here but all we need to know is that a tier 1 mobile carrier will be established on July 1st as the Boost Mobile sale to Dish Network is finally sealed. Registered in T-Mobile’s sec filing, the final sale will be established on July 1st! This will also ultimately mark off the final requirement in the Sprint/T-Mobile deal.

A surprising update recently from CoolPad reveals that they are working on a new Tracker update. This is the same tracker that Smith Micro sells to Sprint and Boost. What’s very interesting about this is the feature update.

Revealed on CoolPad’s twitter account, CoolPad details their plans for a new tracker with proximity tracker capabilities. In other words, a tracker that lets you know when you’re around other people. 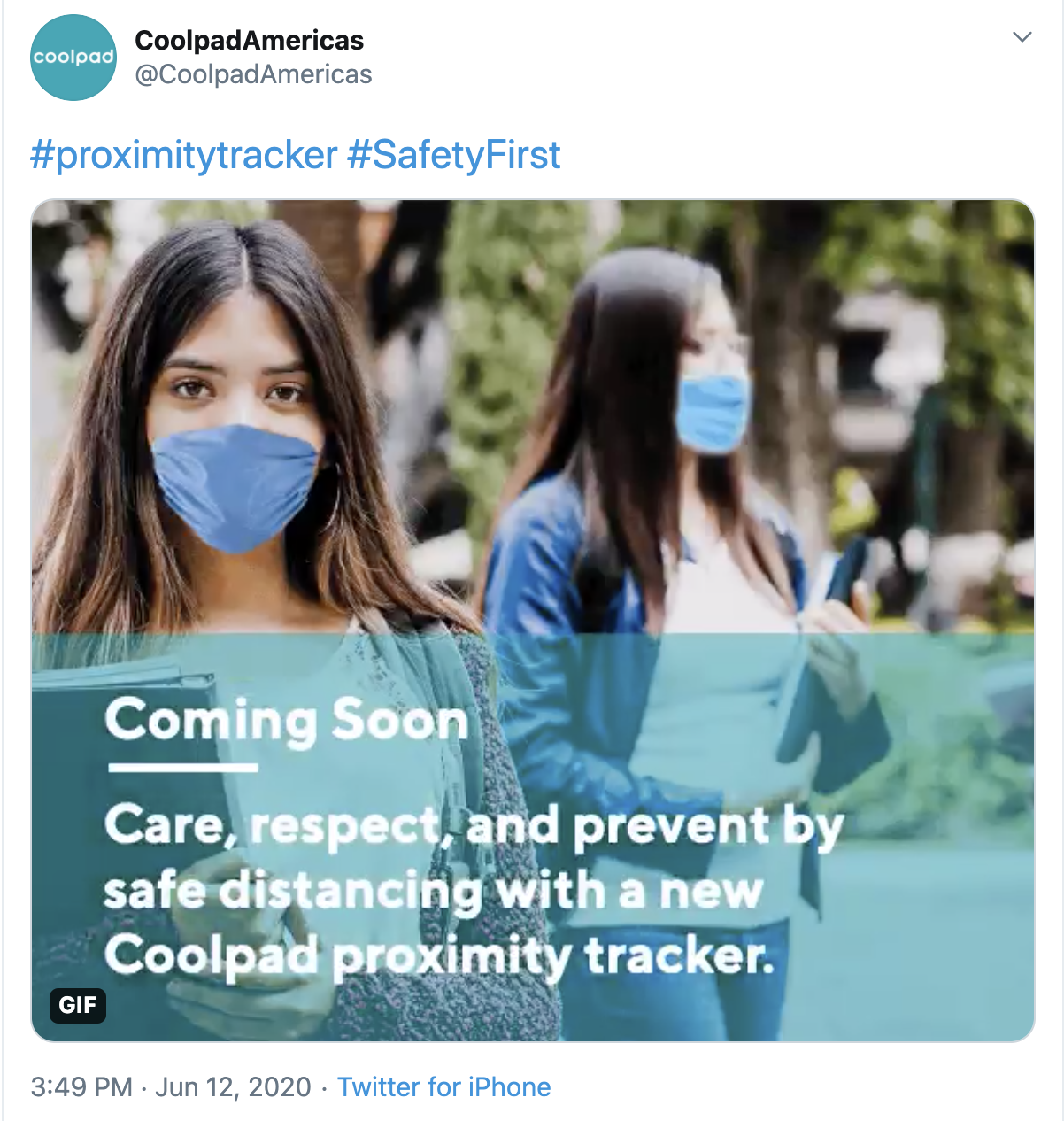 The following tweet shows off a quick glimpse of the idea:

This is indeed meant to be a safety feature to protect oneself in the Covid-19 pandemic. How exactly the tracker will do that, and the details surrounding it are still unknown. Based on the urgency for such a product and the fact that CoolPad has started marketing for it, it’s very likely this release is not too far off.

New IOT devices have been widely mentioned by management throughout the quarters. In the last two earnings calls it was noted that 2020 would bring about a variety of new IOT devices. Half way through 2020 we have yet to see any new IOT devices. This delay is likely directly related to the Covid-19 and merger disruptions. With both of these disruptions slowly dissipating, there should be a clear path to start deploying these products.

The first of these products I believe will be the Dyno 2 watch by Coolpad. Given the strong connection between Smith Micro and Coolpad, I believe there’s clear evidence this product will soon be deployed. The watch is already being marketed on the SafePath platform. It’s also to be noted that T-Mobile currently sells the original Dyno watch and has a strong connection with CoolPad.

The Dyno 2 watch is not alone, I believe there will be a wide variety of other IOT devices also being deployed in the near future although none are as clear as the Dyno2 watch as of yet. The idea is clearly laid out in Smith’s investor presentation slides. 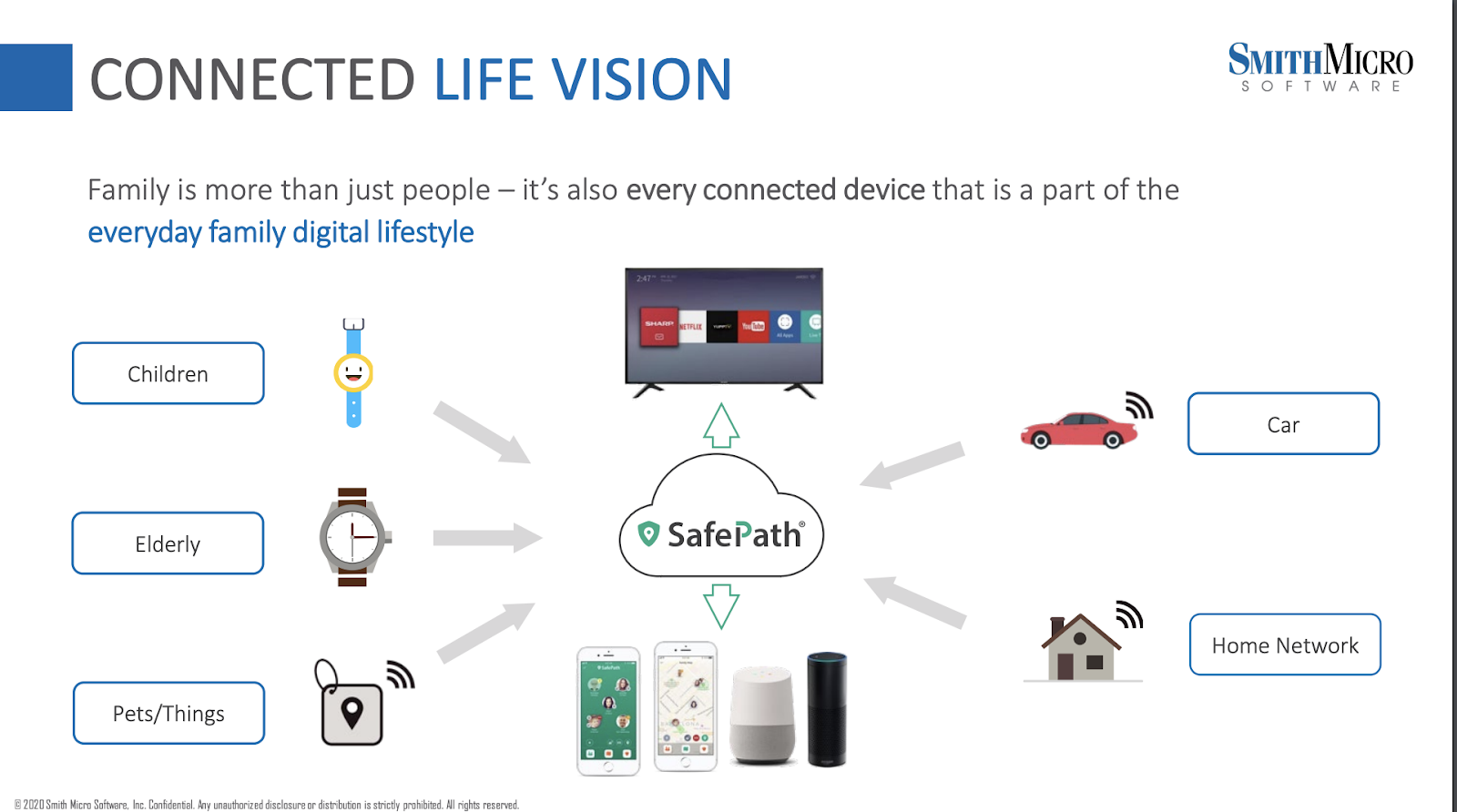 There still is no clear time frame for the IOT devices but I believe it would be safe to assume that they’re clearly lined up and ready to be deployed once things settle down in terms of the merger and Covid-19.

Ultimately all of these events are speculative and are by no means a guarantee, this includes deals like T-Mobile. The timeline for these events could also dramatically change, they have before. Unlike previous times however I believe the obstacles preventing these events are slowly diminishing and the likelihood of success has risen dramatically.

Disclosure: I am/we are long SMSI. I wrote this article myself, and it expresses my own opinions. I am not receiving compensation for it. I have no business relationship with any company whose stock is mentioned in this article.

This website uses cookies to improve your experience while you navigate through the website. Out of these, the cookies that are categorized as necessary are stored on your browser as they are essential for the working of basic functionalities of the website. We also use third-party cookies that help us analyze and understand how you use this website. These cookies will be stored in your browser only with your consent. You also have the option to opt-out of these cookies. But opting out of some of these cookies may affect your browsing experience.
Necessary Always Enabled

Any cookies that may not be particularly necessary for the website to function and is used specifically to collect user personal data via analytics, ads, other embedded contents are termed as non-necessary cookies. It is mandatory to procure user consent prior to running these cookies on your website.